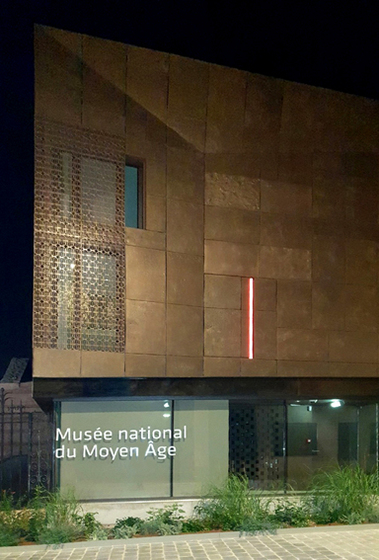 Bernard Desmoulin, an architect known for his precise contemporary architectural interventions on heritage or protected sites, gave us a tour of the Musée de Cluny visitor center

On December 7, architect Bernard Desmoulin welcomed Robert Ivy, FAIA, chair of the RMHP judging panel, and Executive Vice President and CEO of the American Institute of Architects (AIA), James Walbridge, AIA, President of the Architects Foundation (AF), and Michèle le Menestrel Ullrich, Founding President of the French Heritage Society, Founder of the RMHP, and Co-Chair of the Prize, to the Musée de Cluny, the French national museum of the Middle Ages, for a tour of the visitor center that he designed.

Bernard Desmoulin is a member of the Académie des Beaux-Arts and an architect known for his precise contemporary architectural interventions on heritage or protected sites (for example, Salle Pleyel, Musée Rodin, Palais du Louvre, Zona Rosa in Mexico City, Abbaye de Cluny, the restoration of the Grand Commun at the Palace of Versailles and the Port-Royal-des-Champs museum, and even placing buildings on a lakefront in the Vexin countryside).

At the intersection of Boulevards Saint-Michel and Saint-Germain, the Musée de Cluny, France’s national museum of the Middle Ages, blends three styles—ancient baths, the Hôtel des Abbés de Cluny, and the nineteenth century building work that led to the museum’s construction. Even though everything belonged to one single museum, a single site and almost one single block, it lacked overall cohesion and a legible entrance, which the new visitor center managed to overcome.  In this remarkable, historic, and unusual setting in the middle of historic Paris, where construction of any kind becomes a big event, this new building has a commanding presence that is imbued with a sense of duty to bring some additional splendor back to the site, while still thinking in a way that minimizes the impact on the existing structures.

The visitor center had to comply with both architectural and heritage requirements within the allowed amount of space, which helped create the soft design—a blend of old and new. Almost grazing the imposing silhouette of the baths, with perched upon layers upon layers of history, the visitor center’s volume candidly tests a scenario that creates a harmonious blend of both urban and heritage elements from all these different layers.

Great expectations: the foundations of the project

The museum wanted to prioritize making the visitor center entrance visible from Boulevard Saint-Michel by creating a building that was removed from the archeological ambience by using a different material—metal panels made of cast aluminum. This envelope completely preserves the legibility and silhouette of the older buildings. Its lightness, or apparent fragility, caused by the panels and rough composition of the controlled patina, creates a contrast, the airiness of the partially perforated wall panels against the structural stone elements, that aspires to a timeless and poetic feel as it tries to make you believe it has always been there.

Large swaths of perforated metal panels embellish the building’s facade here and there, using a pattern borrowed from the sculpted stone lace in the Salle de la Chapelle. They transform the entryways into a cultural beacon and cast geometric patterns and soft lighting inside the building.